You are here: Home / Herbs / How to Transplant Mint
86 shares 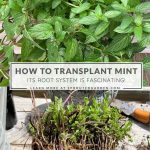 Mint is a wonderful culinary herb and a beautiful leafy green plant that’s very attractive in the home garden. It’s also a prolific spreader. To keep mint under control, it’s best to grow it in a pot. Learn how to transplant mint, whether from the nursery pot, last year’s pot (which it’s outgrown), or even dug up from the ground. Also learn about its extraordinary root system.

One of the rites of passage for beginning herb gardeners is to make the mistake of planting a crazy, propagating plant that quickly grows out of control and takes over the garden. Lol.

My mistake was lemon balm, a distant relative of (but in the same family as) today’s subject. Lemon balm spreads aggressively through both its root system and its surprisingly hardy and portable seeds. Such a mess, I cannot tell you. It took over everything, smothering even purslane and dandelions in its path. I still find lemon balm sprouts in odd places in the yard to this very day.

But I’m here now so you can learn from me: don’t set yourself up for future headaches by planting something invasive like mint in the ground. There are completely sensible and legitimate reasons for letting mint run wild – if you’re an herbalist, for example – but for most backyard gardens, you’ll want to keep it on a tight leash and keep it in – or transplant it to – a container.

Mint is a perennial herb in the Lamiaceae family, of which there are well over 7,000 varieties, from small house plants to large shrubs. Most of what you’ll find for purchase at the local garden center are aromatic mints with lovely and interesting flavors that are prized in the kitchen: the common spearmint and peppermint, of course, but also lemon, ginger, chocolate, pineapple, orange, licorice, grapefruit, lavender, and more.

All of these amazing plants share one thing in common: they grow fast, and they spread far and wide via their elaborate and aggressive root systems.

The root systems of mint have two primary features:

The roots themselves are nothing to shout about, as they produce the typical root ball that we’re all familiar with. But the rhizomes are something else entirely.

They’re clearly identifiable as thick stems (when not dusty with dirt, that is – see a nice shot of them in the photo below) and grow aggressively outward from the plant in a web, with the sole intent of creating new mint plants. And they’re very, very good at it.

The photo above is a one-year-old peppermint plant. When I bought this plant last year, I left it in the nursery pot and set it in some soil on a raised garden bench for the summer. Those rhizomes are just one year’s growth, winding around the interior of the pot. Imagine if those rhizomes had been free to roam the yard!

I hope the photo above drives home the advantage of growing mint in a pot. Even if you’re an avid cook or a connoisseur of mint tea or mojitos, it would be quite the feat to use up all of the plant’s leaves in one season. The average home gardener does not need an ever-more-sprawling plot of mint.

How to Transplant Mint from Pot to Pot

Mint is its best, most behaved self when kept in a pot. Even if you decide it must go in the ground, my advice is to plant it in a pot, and then plant the pot in the ground – and dig up and transplant to a larger pot in subsequent years as needed. The sole purpose is always to keep control of those rhizomes.

When to transplant mint

It’s fairly easily to know when a mint plant needs to move to larger pot. In most growing zones in the U.S., mint will die back in the winter (store the pot in an unheated garage or shed, or at least protected from wind outside). It will, in fact, look quite distressingly dead. But, hold steady.

In the spring, when the temperatures regularly warm above 55ºF, watch for mint’s revival. You’ll begin to see tiny leaves and shoots emerge from among the dead stems.

Leave the plant to do its thing for a bit. If the weather is dry, give it a light watering now and then.

Once the growth begins in earnest, you’ll see a pattern emerge. If the green growth is consistent across the surface of the soil, the plant doesn’t really need repotting.

But if the center of the pot has no new growth, with new green sprouts ringing the edges, it definitely needs to be moved to a larger pot. The rhizomes beneath the surface drive the new season’s new growth, and if the sprouts appear only around the edges of the pot, that means the rhizomes have grown outward from the center of the plant – as is their imperative to do, to spread outward – and are running around the walls of the pot (remember the photo above) because they have no room to do anything else.

Mint’s root ball is not particularly large nor deep, so you don’t need to step up to a significantly larger container to transplant mint. I usually just go one size up (which, in the U.S., pots sizes usually come in 2″ increments), acknowledging that the plant might need repotting again next year. Make sure the pot has a drainage hole.

Choose a pot that’s large enough for the plant to sit in comfortably, with room below for a fresh soil base of an inch or so, and enough space around the sides to fill in with new soil.

If the root ball is particularly compacted, you can gently break up the roots a bit by splitting the ball in half from the bottom up. I normally don’t, though. I also leave the rhizomes alone, even when they look quite squooshed.

If the pot’s drainage hole is more than a 1/2″ in diameter, place a small rock, a square of screen, or even a coffee filter, over the hole, to prevent soil from crumbling out.

Add a layer of soil to the bottom of the pot, and then set the plant in the middle. Add soil around the sides evenly so that the plant remains centered. Continue adding soil up to the level of the original surface. Press the edges down to firm the soil, and water well.

With the plant set in the pot, you can now trim away the previous season’s dead stems and branches.

Use sharp scissors or needle-nose pruners to clip away the dead stems. You can tell dead stems from live because in the spring the woody stems will have no new green growth at any of the nodes along their length. And they’ll be quite brittle. Snip as close to the surface as possible without damaging the new growth around it.

Now set the pot in a sunny location and enjoy mint’s tasty leaves all summer long! The plant will fill in quite quickly.

How to Transplant Mint from Ground to Pot

Normally, moving a plant from its cozy home in the ground to a container is somewhat traumatic for the plant. But, as you’ve already learned, mint is quite hardy, and can survive quite a bit of upheaval.

So, transplanting from ground to pot isn’t as fraught as it might first appear.

If you have a large bed of spreading mint, you’ll likely (if reluctantly) need to plan on just digging up and discarding much of the plants (unless you can repot them all and sell them at market!). The best time to transplant mint is in the spring when new growth has begun.

First, select a pot. If you have a growing bed, you almost certainly be able to choose a clump to fit your preferred pot. Prepare the pot with soil, as explained above.

Using a shovel or spade, identify a clump of mint with healthy, upright-growing stems and lots of green growth. If your climate has harsh winters, there’s likely a lot of dead brown stems. This is not a problem, but make sure you select a clump with green growth, to ensure you’re moving a live plant with a robust root system.

Slide downward, deeply, around the clump with a shovel or spade in a circle, just smaller than the diameter of the pot. Once the circle has been cut, lift the clump from below with the blade of the shovel to free it from the soil. Knock away any loose soil, and transfer the clump to the pot. Settle it firmly, adding new potting soil to fill the container. Water thoroughly, and let rest in a spot that gets some sun, but does not roast in its sometimes strong spring rays.

As you’re repotting your mint, you can also divide a large, healthy plant, to make two or more pottings, or to share.

When the root ball and rhizomes have been separated into two, set the plant down and example the surface stems. You might need to guide things by snipping the stems apart for a clean break. Plant the two halves in separate pots, and you’re good to go.

I’m adding this update at the end of April 2021, as I’m preparing to clean up and repot my over-wintered mint plants, including those featured above.

Here’s a look at my 4 potted mints, from which I’ve already trimmed away the dead stems. Which ones need repotting? Let’s take a look:

A. This is the sweet mint in the largest pot featured earlier in this article. Although I had repotted it just last year, it had an amazing growing season in 2020 – just a gorgeous plant, big and leafy. You can see that 2021’s new growth is starting to trend towards the edge of the pot, but that there’s still an inner ring of growth towards the middle, and some dead center. It can wait another year.

B. This is the peppermint plant also featured earlier in the shorter pot. It has new growth across the surface of the pot and is fine for this year.

C. This ginger mint is definitely ready for a pot size upgrade. The majority of its new growth is not only at the edges of the pot, but its stems are actually looping outside of the edge of the soil (which is difficult to see in detail in the photo).

D. This peppermint plant (#2) should’ve been repotted last year, but was so pretty in this now-flaking-apart pot, I just held off with crossed fingers. Not only is the new growth ringing the edge of the pot, but you can also see the dead stems that had looped around the edge of the pot last year.

I hope you’ve found this look at how to transplant mint helpful and informative!

I hope you found this post helpful, and that it inspires you to grow your own edibles at home, expand your garden repertoire, or try a new technique. If you have any questions or comments, please share them below so that everyone can benefit from your thoughts, advice, and curiosities. Use the buttons above to share this information on your favorite social platform.
How to Get Rid of Thistle
Cucamelons (Mexican Sour Gherkin)