This lovely perennial herb is easy to grow in the home garden and a must-have ingredient for cooks who love layers of flavor. With beautiful, edible flowers, chives are an efficient and economical choice for the gardener who loves to grow edibles: the plant regrows reliably each year without any fuss and has a long growing season and few pests or predators.

Chives (Allium schoenoprasum) have been a fixture in my garden for decades. This delightful, self-propagating, perennial (meaning, it lives for more than one growing season) herb is both interesting in the garden, with spiky structure, and so low-maintenance that it’s almost a wasted opportunity to not grow one.

Early in my herb gardening years, when I was focused on heirloom tomatoes and gave herbs only a second thought, I planted one chive plant and one oregano plant on the edge of a large 15′ x 6′ tomato plot.

I was super surprised when, the next spring, both the chives and oregano popped right back up through the leveled ground. The oregano is a story for another day — it eventually took over that entire garden (and I let it) where it still becomes a flowery honeybee haven during the height of summer — but the chives spread and thrived until nearby pine trees grew to a height that completely blocked their direct sunlight.

I’ve since relocated the chives to a smaller border garden in full sun. Some photos in this post are from the original chive garden, and some are from the new.

Should I Buy a Plant or Start from Seed?

Like most herbs, chives are easy to start from seeds, and seed packets should be readily available at nurseries, garden centers, and online merchants (often labeled as “common chives” as opposed to garlic chives or Chinese chives).

As for plants, normally chive starter plants are available at local nurseries, and sometimes the big box garden centers, in the spring. I know that we’re having supply issues across the board here in 2022, but I was surprised to note that I have yet to see a single chive plant for sale here in May.

But if you do find them, know that they’ll easily survive transplant to your home garden.

Should I Plant Chives in Pots/Containers or in the Ground?

Before we dig into this question, it’s important to remember that chives are perennial — that is, they regrow every year — and can survive for many, many years. If this is an attractive feature for you, you’ll want to factor that into your decision.

For example, if you plan to change residences soon, you can plant it in a roomy pot and take it with you.

If planting in the ground, be sure to choose a spot where your chives can stay put year after year without being disturbed (e.g., by tilling). Don’t forget to leave some room for spreading.

Chives will thrive in either arrangement. Keep in mind that plants in pots generally need more frequent watering during the height of a hot summer.

Chives plants will produce leaves for most of the growing season and then die back to the ground during cold weather.

If growing in a pot, cut down the season’s growth to the soil line in the fall and store the pot in a protected space, such as the garage or shed (no heat needed).

If growing in the ground, nothing need be done at the end of the season — except possibly dividing the plants; more on that in a second. Just make sure that you don’t disturb where the chives are growing with tilling or other soil leveling activities, as you don’t want to kill the underground bulb.

How to Grow Chives from Seed

Chives do not have to be started indoors. As soon as the weather warms reasonably reliably — when most days reach into the 60s and above, and the threat of snow is past — you can seed your garden.

Whether growing in a pot or in the ground, make sure you use rich, loose soil that’s been amended with compost or other similar additives.

It could be a bit of a challenge to estimate how many chive plants you’ll need. For me, when I moved my chives to a new location, one plant was all I needed to cover my cooking needs for the summer.

Keep in mind that chives will self-seed as well as spread underground, so one plant can easily double in volume the following year.

Conservatively speaking, I feel like one or two seeded plants will do it. Sow three seeds if you want to build in room for germination failure. For containers, thin to one plant per pot once they’ve sprouted.

Dig a hole about a 1/2″ deep, spacing them about 3″ apart, and drop in the seed. Cover with soil, firm, and give everything a good watering.

Germination takes about two weeks: longer if spring is on the chilly side; quicker if the soil manages to stay above 60ºF. Keep the soil moist but not drenched.

What Are the Parts of the Chive Plant?

The “leaves” of the chive plant are commonly called a variety of terms: leaves, stalks, stems. They’re all correct in their own way, but in this post, I’ll be calling them leaves.

The green leaves of the chive plant grow in clusters and can resemble, from a distance, tufts of tall grass.

Individual leaves emerge from an underground bulbet and are smooth, hollow tubes that narrow to a pointed tip. They emit a leek-like fragrance when rubbed.

Bulbets cluster in a clump beneath the plant and send out impressive root systems.

A chive leaf can sprout a flower head at its tip, although not all of them do. Seeds form within the flowers and upon maturity fall to the ground. This is one way that chives spread in the garden.

Yes! The lovely, delicate lavender flowers have edible florets that are lightly garlic flavored. The florets grow in a round cluster, protected by a papery bract until ready to bloom.

To use, cut the entire bloom from the green stalk, and gently pluck the florets from their base with your thumb and forefinger. Each floret looks like a mini tulip and is completely edible.

Chive flowers are generally used as an attractive garnish and should not be cooked or heated, as they’re far too delicate. They’re beautiful sprinkled over salads, egg dishes, soups, pasta dishes, and even sandwich spreads (think, goat cheese spread on crusty baguette slices for brunch — use both chive flowers and snipped chive leaves for lots of color!).

Here are two examples from my food blog where I’ve used chive flowers in my cooking: Vegetarian Pad Thai and Spring Cauliflower Fennel Soup. The chive flowers are clearly visible in the first photos of each post (so you don’t have to scroll if you don’t want to).

If you’re only interested in a strong season of leaf production, you can remove the chive flower heads early on (they appear in late April/May) so that the plant will concentrate all of its energy in producing more leaves. It takes a lot of energy to produce flowers and seeds!

Are Chives Deer and Pest Resistant?

For the most part, yes! Chive leaves, with their oniony scents, repel most of the common U.S. pests. Furthermore, our furry woodland friends — such as deer, bunnies, raccoons, and opossums — are not big fans of chives because of same.

But don’t be surprised if you find one morning that a big chomp has been taken out of your chive plant. When desperately hungry, deer (in particular) will take a mouthful before moving on. Other animals may sample a leaf before rejecting additional bites.

I’ve never had chives eaten to the ground but often find a few stalks cleaved off.

Chives have limited insect and disease vectors and are uncommon in the home garden.

How to Harvest Chives

You can begin using the chive leaves when they’ve reached 6″ to 8″ tall. Use small scissors or sheers to remove one leaf at a time, cutting it off near the base.

Chive leaves can be harvested all summer long. If you can, avoid using the leaves with flowers on their tips, as that leaf stem will be focusing energy on nourishing the flower, and it might not taste as it should.

How Do Chives Propagate?

Perennial chives can propagate in three ways: by seed, by roots, and by division.

By seed: If you leave chive flowers on the plant, they will mature, dry, and eventually will form seeds — they’re sesame-seed-sized and black — which will fall to the ground. This free-wheeling seeding method is not always particularly successful, as the seeds need to make their way into the soil (which they often don’t).

But don’t be surprised to find stray chive seedlings elsewhere in your yard the following year, as birds or wind will carry them to random places.

By roots: This is the most common way for a chive plant to spread year over year. The underground bulbets will self-divide, root, and send up new leaves the following spring. Plants can easily double in size each year, above and below ground. For example:

By division: If left unchecked, a chive plant can outgrow its space, leaving healthy production to suffer. Instead, chive plants should be manually divided every 3 to 4 years.

Do this by digging up the entire plant with a shovel, dig deeply around and underneath the plant, taking care to avoid harming the bulbets and root system.

The chive plant will come out in a big clump, with easily visible bulbets and roots. Shake off excess soil, and carefully pull the plant apart. You can divide the plant in half, and replant each half about 18″ apart.

Or, if you have gardening friends, divide the plant into thirds or fourths, and share the divisions.

Opinions differ, but I recommend doing plant division at the end of the summer, before the leaves die back and before chilly weather sets in, so that the division doesn’t upset new spring growth. However, if you’ve forgotten to divide the plants the previous fall, you can divide chives in the spring, once the new growth is well established (say, late April).

Are Chives & Green Onions the Same?

No, they are distinctly different plants, although they share similar flavors and are part of the same genus, allium. Chives are considered herbs, while green onions are vegetables.

Although both have white “bulbs,” chives grow in large clumps, using their bulbets for propagation, not consumption, while green onions are singular plants and are fully harvested from tip to root (i.e., the bulb is pulled along with the plant, and is used in cooking).

At the store or farmers’ market, chives will likely be packaged in a bundle, either in a plastic clam shell or bound by rubber bands. Green leaves only, no bulbets. Green onions might be displayed individually or bound in a bundle, but either way, their white bulbs will be clearly visible.

How to Use Chives – Recipe Ideas

Chives are a universal garnish and flavoring in many world cuisines. Their mild onion flavors complement a wide variety of dishes and are best used raw or minimally cooked. Some ideas:

Chives are a delicious addition to the home cook’s ingredient list and an easy and interesting plant in the herb garden. Economical, too! 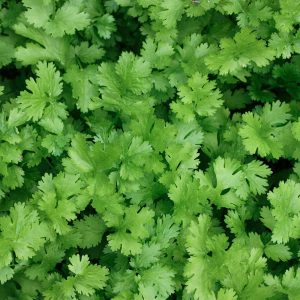 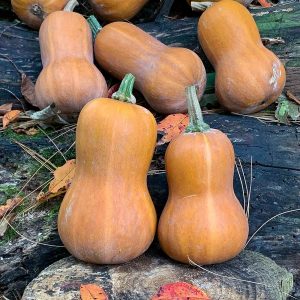 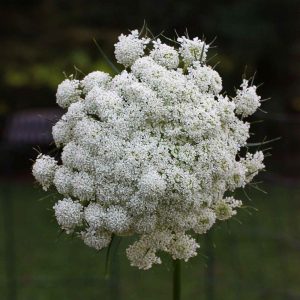 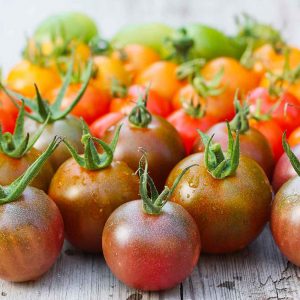 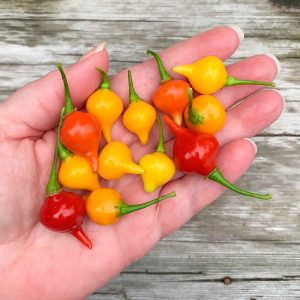 Biquinho Peppers: How to Grow and Care for